Three of the four Compute Station types use Linux Kernels under their main operating systems. 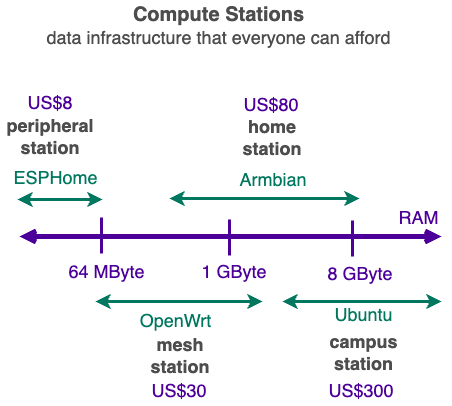 As of 2022-12-01 all Linux kernels in Compute Stations are Linux Long Term Release (LTS) kernels.

Ubuntu runs on a wide range of computers, from tiny Raspberry Pis to massive IBM Mainframes, enabling Compute Stations to deployed in all possible application.

Note 5.10 is NOT an Ubuntu enablement kernel but we are using it on our Ubuntu and Openwrt stations for compatibility across a range of hardware and software.

Armbian supports many low end computers enabling everyone to own a piece of the crowd infrastructure.

Openwrt supports thousands of low end devices enabling everyone to own a piece of the crowd infrastructure.