Data is not useful by itself, it needs compute power to process it in order to create value.

Currently DATA is given to those with COMPUTE power, so the resulting value (information asset) belongs belongs to Cloud.

88.io gives COMPUTE power to those with DATA, so the resulting value (information asset) belongs to you.

matches the infrastructure and easy of us

Import Compute instead of Export Data 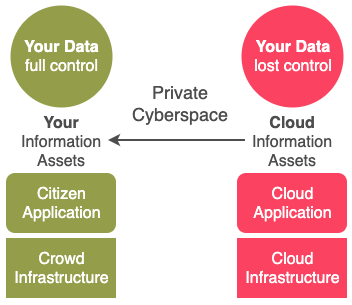 Your Private Cyberspace gives you control of both the applications and the infrastructures that process your data - your data now become your Information Assets.

You can create your own private cyberspace to store your information assets with just ONE CLICK, independent of your wealth and skill levels. 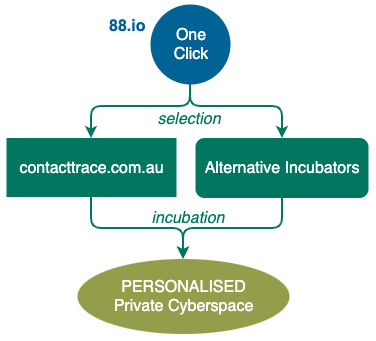 After clicking 88.io, you will be redirected to a list of ready-made private cyberspaces to select one that best meet your requirements. These different Seed Cyberspaces are preloaded with applications and infrastructures by Cyberspace Incubators to ensure a rapid realisation of benefits for different parts of the society.

Due to its original design as a Virtual Vaccine to fight COVID and future pandemics, the Seed Cyberspace available from contacttrace.com.au has a focus on collecting Time and Location assets into your private cyberspace.

which , incubators in your country might provide a different experience

You can select an incubator of your choice to provide you with a ready made Private Cyberspace that you can used immediately to built your information assets.

, gaining unique insights into their lives and growing data income for themselves instead of for the cloud.

Clicking on 88.io will redirect you the nearest

Clicking on 88.io will redirect you to the

With almost everyone on earth being fed a diet of FREE services by Cloud Computing for so many years, it would be difficult to move people away from the Cloud, unless there is something that is BETTER THAN FREE.

The increasing transfer of the world's information assets (and thus power) from so many to so few is occurring because the Cloud does bring significant INITIAL BENEFITS to the end users: 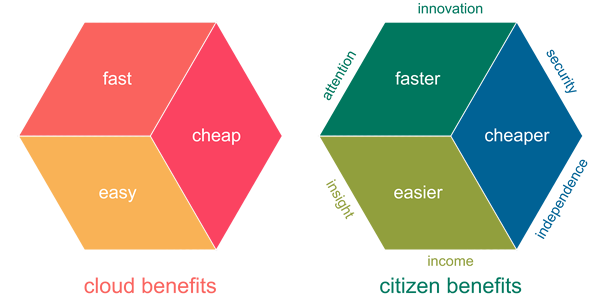 Something that needs to be FASTER, EASIER and CHEAPER than the Cloud but WITHOUT manipulating the users' world view NOR selling users' data.

It needs to offer benefits that are not possible under Cloud Computing, like substantially providing the users with:

The trillion dollar question is HOW ?

The obvious solution to the problems with Centralisation of computing in the Cloud is its Decentralisation, a similar process happened about half a century ago. 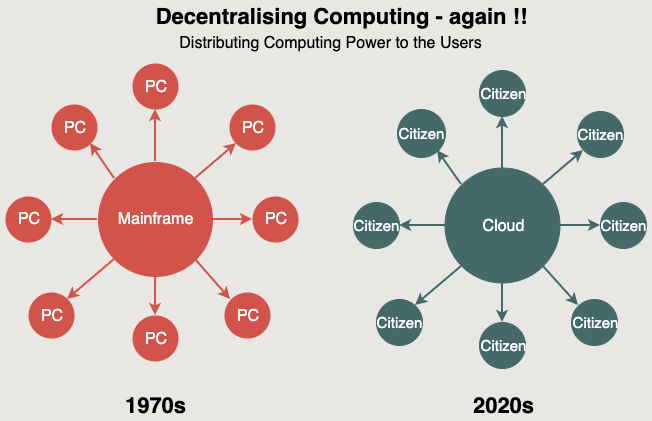 In the 1970s Personal Computer
distributes the centralised computing power of the Mainframe to the masses.

In the 2020s Citizen Computing
distributes the centralised computing power of the Cloud to the masses.

In the 1970s there was NO computing power at home because there was no computing infrastructure there, so pushing out computer hardware is a great step in decentralisation.

With exponential explosion of information in the past decades, the Cloud Infrastructure provides end users with a cheap and easy way of interacting with the increasing amount of information around the world BUT by doing so the Cloud also controls the world's information. 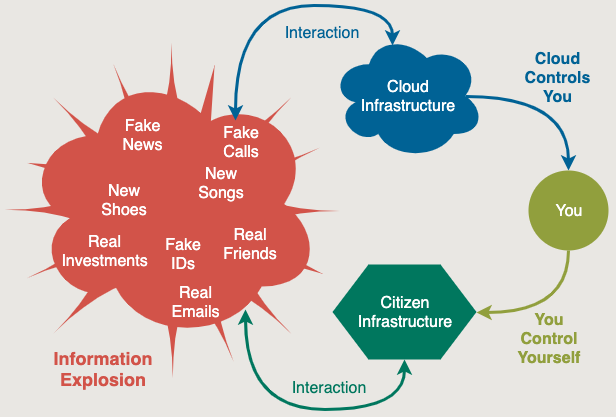 With numerous massive data centres around the world, there is NO WAY for citizen Computing to match the scale of the economies of the Cloud using traditional infrastructure. 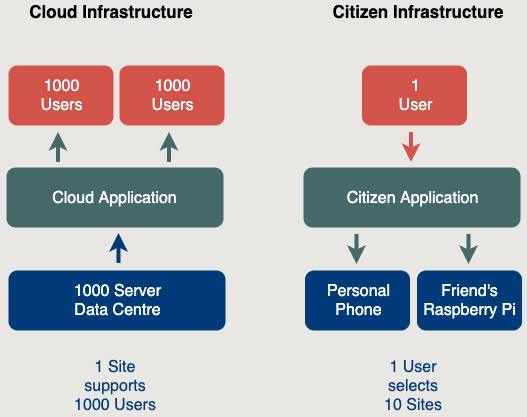 Instead of having to support thousands, the "upside down" citizen infrastructure only has to support one.

The principle of Separation of Powers is important in the functioning of a government, the same principle is used in handling information assets.

In Citizen Synergy Computing the principle of separation of powers is enforced by handling information assets in three separate CYBERSPACES, each with independent infrastructures. 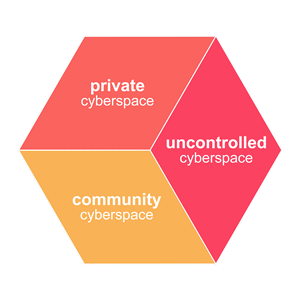 An Citizen Synergy project that operates across all 3 cyberspaces is the Citizen Assisted Contact Tracing https://contacttrace.com.au: 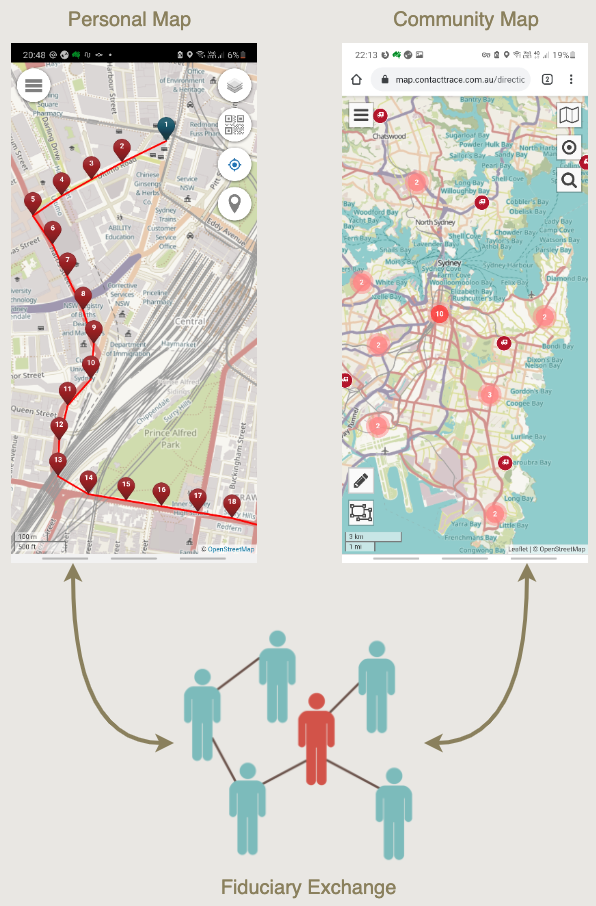 Private Cyberspace complements instead of replaces Cloud Computing, it simply move information assets to places where it makes sense, enabling the user to control how much data to release into each cyberspace for how much return. 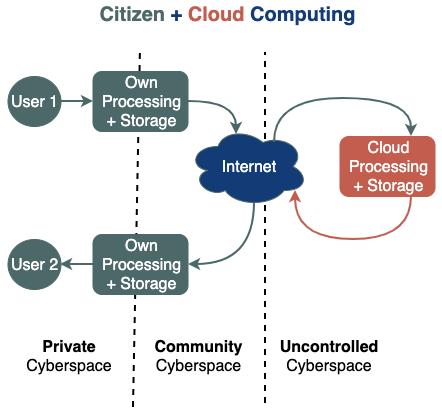 The incumbent power of the Cloud Computing can be leveraged nicely in the Community Zone, where user private data in the Personal Zone can be processed in the Fiduciary Zone before releasing to members of different communities in the Cloud.

With Cloud Computing (Crowd-SOURCED data), your information assets are being transferred to the Cloud everyday to become THEIR assets.

Currently, you are ALREADY exposing every aspect of your life to the Cloud for the Cloud's benefit, all citizen Computing does is to enable you to use those SAME data for your own benefit.

Regaining control of your information and reclaiming its ownership, means IMPROVEMENTS in many critical areas:

You can create your first Private Cyberspace instantly by CLICK HERE to load the 88.io web console onto your mobile phone.

By default there is NO sharing of data, your alias is for data Collection only, allowing you to build up your information asset privately for your own personal use.

You can multiply the benefits of your Private Cyberspace by sharing information assets within it.

A citizen energised information ecosystem is massive a computing paradigm shift, with so many brains (humans and machines) working together, every application is a game changer.

Private Cyberspace of one of two types of computing grids in the 88.io ecosystem. 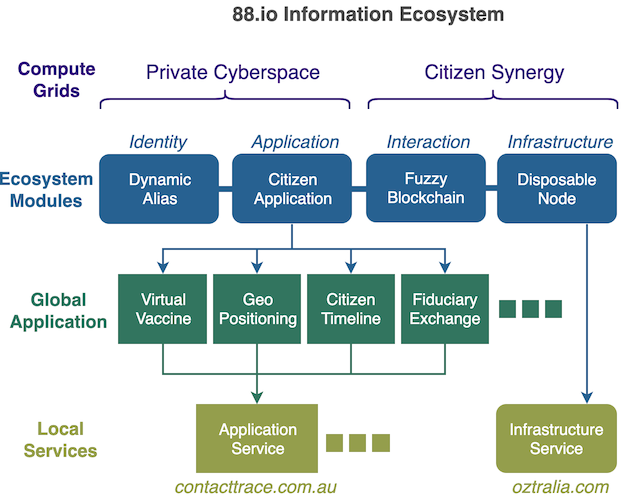