Excess power is used to pump water from a number of Bottom Tanks to a number of Top Tanks, while water from the Top Tanks are used to drive turbine when stored power is required. The specific tanks involved each time can be different, depending on how much flow is required, how high they are, how much water is left in them etc.

Water Pile is unique in many ways, unlike existing gravity energy storage which is built and owned by a single entity, Water Pile's construction, operation and ownership are distribute amongst many entities. 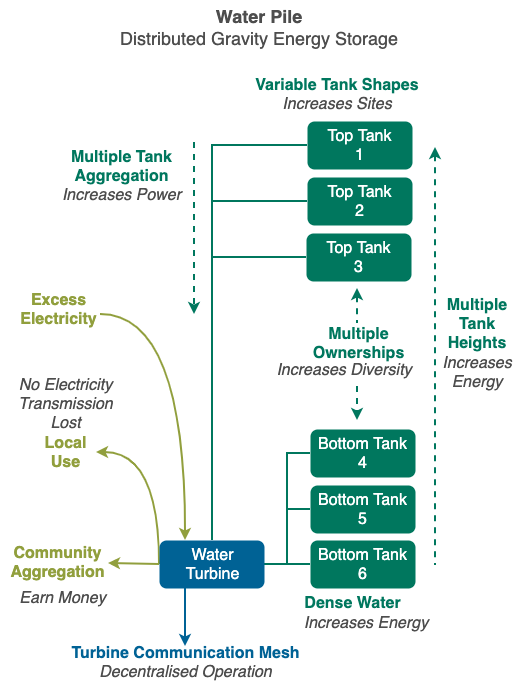 Will a million water tanks working together deliver the same benefits as a million mobile phones?

Wind energy is much more variable than solar energy, storing excess energy at the source with each wind turbine individually could revolutionise the whole industry.

Since the energy is stored at the wind turbine itself, there is no need for a separate storage site and no transmission lost. 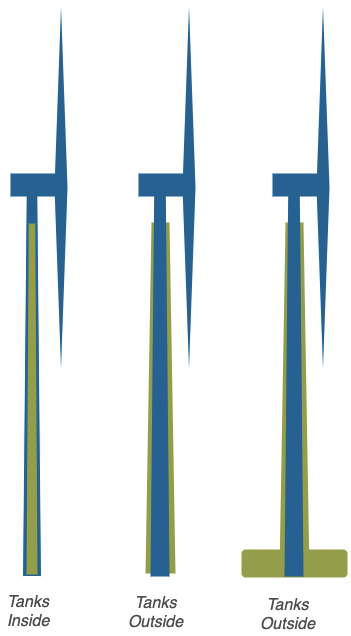 This is particularly suited to sites with high frequency of wind speed variations, as the highest Top Tanks will be filled and emptied continuously.

For wind farms with more than one wind turbine, it can more economical to aggregate the flow and have one water turbine serving a number of wind turbines.

A lot of human made structures like buildings and high voltage transmission towers are tall enough and close enough to each other make Water Pile deployment viable. 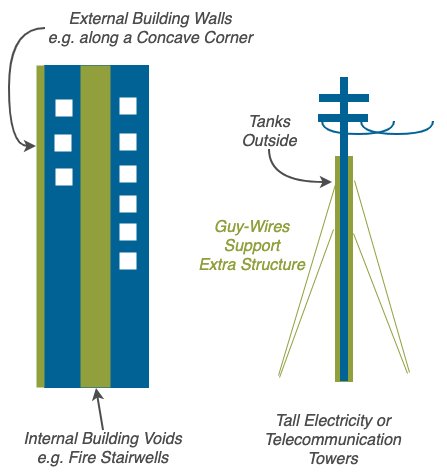 Although it is possible to build standalone Water Pile towers to store energy, it is much better to have Water Pile deployed near energy sources to leverage their physical structure and the reduce any of power transmission lost.

Buildings might have solar array on the roof and a lot of large internal voids (e.g. fire stairwells) where Water Pile tanks can be mounted on different floors to reduce demand for precious lithium (which light weight is not really needed in a building).

Electricity towers already have electricity running overhead and are normally of much stronger built than telecommunication towers. Having Water Piles located at the transmission towers can smooth out the supply and demand curve of the whole electricity infrastructure (whether it is from renewable or not).

Most countries have cliffs either along the coastline or in the mountains near power sources or transmission towers. Water Pile's flexible tank shape means it can be deployed quickly and non-intrusively to provide storage near those sources.

The vertical drop of the cliffs is not required in a lot of cases e.g. the Water Pile tanks can be arrange on a slope. 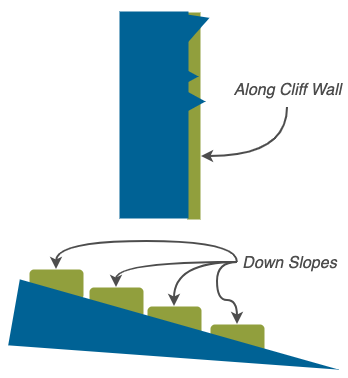 As long as there are structure to support the water tanks, whether is it a deep hole or a tall cliff, a hilly suburb or an open cut mine does not matter. The idea is simply to dynamically adjust usage of multiple tanks at different height so the head and flow can remain the highest possible at all times.

Like all Water Pile deployments, the more numbers deployed nearby the better, to compensate for water's low density. Normally multiple Water Piles will be deployed together along the cliffs or on the slopes.

A lot of cities around the world are hilly, with many houses built on the slopes at different highs. Water Pile can combine the tanks in all those houses into a giant battery. 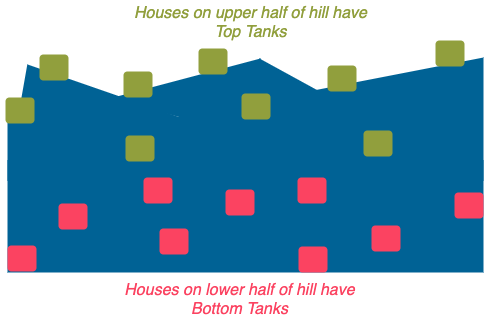 Houses on the middle of the hill can have either top or bottom tanks depending on demand, the idea is try NOT to use them, if tanks above or below them are available, to maximise "head".

Depending on the diversity required, each house can feed one or more turbine at the bottom of the hill. All tanks are part of the Turbine Communication Mesh, so all components within the mesh, tanks and turbines, can work together seamless to maximise head and flow.

Initially we are looking at hilly suburbs with a lot of solar panels installed. So two neighbours with large elevation differences between their properties can start working together to seed a future community battery, making it easy for other neighbours to join in.

There are hundreds of ways to store energy, from moving dirt up hill to compressing air to exotic chemical processes to keeping something really hot ... all very complex, fragile and expensive - compared to water.

We need very large scale, we need small footprint, we need ultra low capital and operation costs. Yes, water tank as a gravity store has a poor energy density but when there are a million of them working together intelligently ...

As the only blue planet in the our solar system, why not make more use of something so abundant yet precious ?