Every benefit of the Private Cyberspace must be underpinned by solid security. There is no point collecting assets if they are stolen or making impacts if they are misdirected.

Private Cyberspaces are substantially more secure than traditional Cloud based services as you have full ownership and thus full visibility and control across all your data at all times.

When a single organisation has control of all your data, it does not matter how much it claims it has done to protect your privacy and security (e.g. uses open sourced software, does not keep logs on servers etc.).

Take the Signal service as an example, which is endorsed by Edward Snowden and Elon Musk:

We are talking about ONE party getting ALL the phone numbers, ALL the times of call connection, ALL IP addresses of ALL its users worldwide (as well as leaking metadata to Apple and Google).

Signal is just an example, these trust problems apply to ANY centralised service that claims to protect "privacy" e.g. your favourite VPN Service or Bitcoin Mixer. And if they ask for payment, which any proper service should, then you just created another attack vector into your identity.

The problem does not only apply to niche small companies that aggregates data, what about the biggest Single Vendor there is, Apple ?

Has Apple ever inform you or asked for your permission before starting to use your phone, your internet bandwidth, your battery power, your person location to help them sell more Air Tags ?

The trust problems above also apply to all devices which are connected to the internet from cameras to teddy bears and of course mobile phones.

Whether it is remote servers in the cloud or the mobile phone in your hand, centralising data on devices that you have little control is dangerous. From iOS hacks to Android vulnerabilities to methods leaked in Vault 7 the data centralised on the mobile platform are too valuable to be left alone.

Large centralised databases (storing your location, contacts etc.) become very high value targets, look at the massive leaks at Facebook which just happened AGAIN after the problem was supposed to have been fixed after the last leak.

The less amount of data a Node holds, the less data there is to be stolen if that node got hacked and the easier it is to recover if that Node got damaged.
The more Nodes you have, the less damage can be done by one and the more they can check on each other.

Citizen Computing lets you specify which Node to use for which Module, so for some Modules you might like to use Nodes from people you actually know and located in places you have actually visited.

With Citizen Computing everything is encrypted whenever possible, double or even triple in most cases.

People need to behave differently in front of different groups of people, you need them to know different things about you.

Getting everyone you know on the SAME "social" platform to see one view of you or timeline of yours just does NOT make sense!

For different situations, Citizen Computing allows you to disclose different and just enough information about yourself under each identity, leaving out the rest of the data for privacy and profit.

Citizen Computing has basic security rules which prevent you doing dangerous things in general (e.g. uploading unencrypted data to Nodes outside of your Personal Zone, blocking known bad IP addresses etc.) all of which you can of course turn off.

Existing Cloud Platforms can STILL make use of their substantial investments in all 3 realms of Citizen Ecosystem (directory, application and infrastructure) . . . the difference with Citizen Ecosystem is making their investments available INDEPENDENTLY - so the Information Owners has the ability to mix and match freely to build the best digital environment for THEMSELVES. 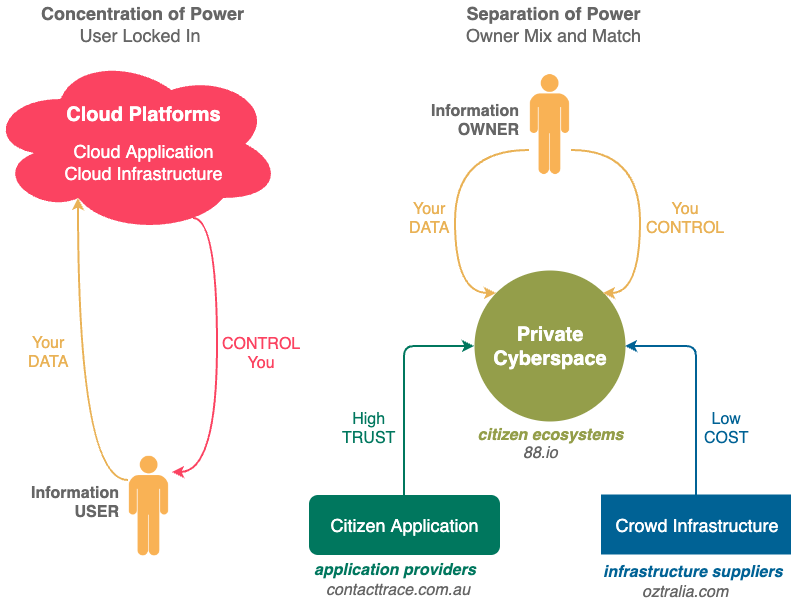 There is NOTHING stopping citizens from picking Apple or Google or whatever components exclusively in ALL 3 realms of their information environments, but with Private Cyberspaces - if they wanted to, they now CAN swap some or all of those components out easily.

With their tight integration across all 3 realms and massive software and hardware capacities, Cloud Platforms can transform into very strong components suppliers within Citizen Ecosystems. They just need to innovate and operate based on increasing the compute power of Information Owners instead of using their compute power to increasingly control the behaviour of Information Users.

Private Cyberspace can be used to deliver an instant IT department to businesses big and small.

Yes, it sound crazy, but it is true! Private Cyberspaces can work with and benefit Cloud Platforms!

Just not in more equitable way instead of the dominating ways that Cloud Platforms are used to.

Work WITH your data sources instead of CONTROL them! Tap into their unlimited resources and capabilities with crowd-owned computing instead of just crowd-sourcing data from them.

Private Cyberspaces are NOT going to destroy Cloud Platforms overnight. They are just the next stage of mass computing for humans.

There is still a window of opportunity for existing Cloud Platforms to evolve into directory coordinators, application providers, infrastructure suppliers before explosion of focused offerings within each realm from new start-ups.

Private Cyberspace can be used to deliver an instant IT department to businesses big and small.

Private Cyberspace can be used to deliver an instant on IT department to businesses big and small.

Private Cyberspace can be used to deliver an instant on IT department to businesses big and small.